Isotropix announced in London, just over a week ago, Clarisse BUiLDER (the lower i is to denode Interactive). The new tool is designed for studios working on large scale, high end VFX and animation. This is not intended to be a widely distributed tool, such as their flagship product Clarisse iFX.

Clarisse BUiLDER is a new and powerful integrated node-based scalable solution for interactive look development, lighting, rendering and pre-compositing. Fxguide got an early look during the testing stages and the product appears to be a very robust nodal solution aimed for high end Tier 1 studios. The company is interested in servicing companies with complex pipeline teams. It was created after about four years of R&D in collaboration with top Industry experts and Isotropix clients.

Clarisse BUiLDER, adopts a procedural rendering workflow that provides complex production tools for lighting and managing looks over a range of shots in multiple scenes. Clarisse BUiLDER gives lighters the ability to non-destructively perform arbitrary edits at either sequence, shot or layer level, while working interactively on ‘comped’ or layered images. Clarisse BUiLDER should reduce iterations costs, help manage workflows that often bounce back and forth between departments while also increasing production/project management.

Isotropix is a software development company founded in 2011 by former CG Artists, Sam Assadian and Sebastien Guichou. The company has now grown to some 40 staff. The company develops high-end 3D graphics software targeted for the VFX/Animation industry and is used extensively by key clients such as DNEG, Industrial Light & Magic, WETA Digital and Dreamworks Animation. Clarisse iFX was used in film’s such as: Star Wars The Force Awakens / The Last Jedi, Wonder Woman, Dunkirk, Blade Runner 2049 and, as fxg reported recently, Ant-Man and the Wasp.  It is also used in TV VFX teams such as those at DNEG. Clarisse iFX has been used extensively on shows such as American Gods, The Young Pope, Black Sails, Black Mirror and Altered Carbon.

The question facing Isotropix is: with BUiLDER, can the company expand and service complex high end facilities with their bespoke pipelines and demanding high end projects?

BUiLDER starts with the assumption that asset flow management and scene construction is simpler when working with a nodal GUI. It aims to provide deferred scene assembly along with Look and Lighting management.  It produces pre-comps ready for say NUKE compositing, but with the ability to edit the scene in the program itself, – previewing new variations quickly and easily. BUiLDER has 6 main aspects: 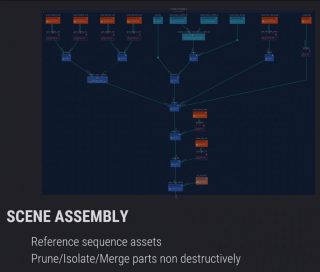 The product is aimed at Lighting TDs, so the product has a lot of tools for scene assembly and asset management in a major film pipeline. It is designed around reuse of both assets and setups. The aim is to streamline from scene assembly to final render, moving shots quickly to final comp. For example, TDs rarely need to wait for a scene to fully load before they can start working on it. BUiLDER is exceptional fast to load and start working on a sequence.

BUiLDER takes advantage of most of the things that have made Isotropix a success to date. For example, it uses the power of Clarisse iFX famous Instancing system and other innovations. 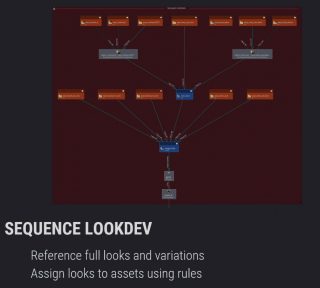 BUiLDER is interactive to allow LookDev to be done either by an individual or a team. The product is heavily WYSIWYG, with detailed controls on what is updated so you can work quickly.

In the one graph you can have multiple options or paths in the nodal tree. BUiLDER opens so quickly as everything is not loaded when the node graph is first displayed, it depends on where the focus is set, and thus what models etc are imported/opened.

Lighting artists can work in layers and can see a rough ‘slap comp’, while they are working.

Each element can have its own LookDev. This is the same LookDev as iFX, as BUiLDER is a superset of its older brother. 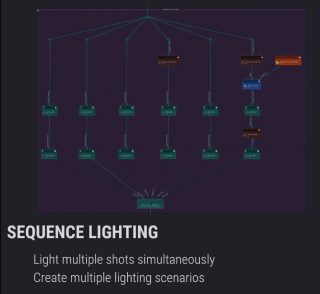 You can set up one shot as the master lighting and other shots will inherit this setup. The shots are hierarchical and versioned.

The product aims to provide both Micro Management per item editing and  Macro Management of the sequence. It is very much an asset-based operational flow. BUiLDER is great at assembling scenes, but it is also flexible enough to allow lighting tweaks and set dressing on an individual shot.

Set dressing which is normally very time consuming, can be done easily with the Merge node. Modelled props or things such as fire sims can be added. It is very impressive to watch how easily someone can modify the scene and add, or use the override node. 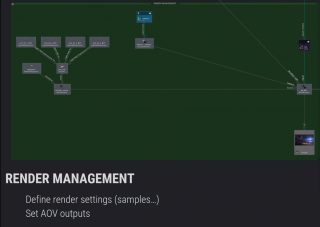 Pipeline integration is central for a tool such as this. BUiLDER has been built and tested with Houdini, Maya, 3ds Max and other common creation tools.

For example, if a shot is setup for a particular Raytracing configuration (samples etc), then this and the AOVs based on LPE Light path expressions are all transferred to other shots in the sequence. 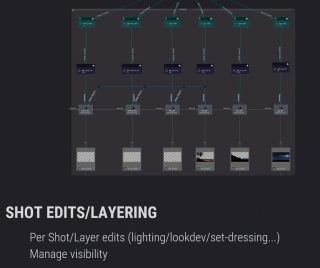 Direct access for small changes. As with other node graph systems, you see the path of what is being used and rendered.

It is possible to manage Micro edits at the shot or layer level. Attributes can be varied inside the program easily, even when they are very specific and quite detailed. The ability to do massive edits which are global or small edits such as set dressing is really impressive to see.

The layering can make shot work easy. Layers are made with rules linking assets. For example, when switching background geometry, the render time on screen is reduced as many aspects of the image will not changed and the system uses those values as ‘pre-computed’ data for the new shot. 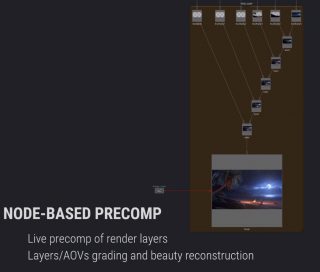 Building on the Master Lighting hierarchy, the AOVs and other render aspects are all inherited by lower level shots.

Once the various Layers are setup, they can be managed into a pre-comp. At this point 2D operations such as grading can be applied to any layer. The output is a pre-comp that allows it to be handed onto compositing.

Clarisse offered a demo at the launch of BUiLDER, and showed a piece called Mery and her Friend. The piece is a rift on Castaway. The assets were made in Maya, Houdini, and Clarisse.  Mery and her ‘Wilson” were imported with Alembic. The project used OpenVDB and also Substance and Photoshop. The two environments, the island and the desert, were made in Clarisse iFX.

There were 36 variations with 6 shots which would be 216 Render setups normally. To prove a point the demo showed Mery on an Island but then the Island environment is swapped to be a desert. Additonally, there were different outfits for Mery and time of day lighting setups. This simple set of ‘variables’ could lead to an astonishing set of possible versions, and BUilDER is designed to be able to not only explore these variations but edit them.

The demo moved easily between the desert and the Island. For example, when the team went back to the original island, the asset and cache was not trashed. The demo used an alembic import of Wilson, Mery etc (as well as the scene camera with an extract node). To show the detailed control, we could focus just on the hair sim of the character or swap the clothing on Mery using a merge node to switch cloths sims.

As BUiLDER is designed for large facilities it can run on a virtual machine, such as an PC over IP style system, just as well as a physical machine.

“Back in 2012, Isotropix unveiled Clarisse iFX and… Clarisse iFX has become the tool of choice for its reliability, super fast lookdev, lighting and rendering workflow and its unique ability to create and manage large scale environments. Thanks to our strong collaboration with Industry leaders, we are now super excited to unveil Clarisse BUiLDER on which we spent 4 years of design and R&D solving the difficult issues major studios are facing. We are pushing the limits even further by bringing the revolution we started to the next level! Today, Clarisse BUiLDER is simply the most advanced integrated scene assembly, lookdev, lighting and rendering solution ever made!” commented Sam Assadian, CEO & Co-Founder at Isotropix.

Key to the product is the notion that sequences should be streamlined from scene assembly to final render. In the context of a complex pipeline asset flow management and for that matter, scene construction, is simpler when working with a Node based approach. Clearly, Maya, And Max etc are more all-in-one solutions that handle modelling to rendering. BUiLDER does not take this generalist approach.  It is designed as a scene and pipeline lighting tool, but made with very fast editing and manipulation functionality. BUiLDER adds project management and large scale asset manipulation to the Clarisse IFX model. It is aiming to be more WYSIWYG than say The Foundry’s Katana. Which is also a lighting workflow tool but without the same direct manipulation tools. Katana that started life inside Sony Imageworks has grown at the Foundry to be a killer App. Katana has developed this side of the effects and animation business and rewarded the Foundry with strong user support. For example, ILM found the Foundry’s Katana incredibly powerful for example on the last Jurassic film (see our story here). The question is would a company like ILM, who already use Clarisse IFX, especially on environment work, adopt a BUiLDER pipeline? Only time will tell, but for our industry, competition is always healthy and BUiLDER does introduce some strong new workflow ideas.