Nectar is an ambitious passion project of writer and director Anthony Zwartouw. The story is a heartfelt, yet darkly comic, genre-bending drama about the psychological torture that David, the main character, experiences in his struggle to cope with drug addiction. Told through the tropes of a desert island survival story, representing the protagonist’s isolation and inner turmoil, David’s journey involves mind-bending, powerful imagery, including a subway train sprawled out of the ocean onto the beach, creatures that take the form of crab-like surveillance cameras and the parasitical Guard who will stop at nothing to keep David from escaping.

Anthony Zwartouw is currently a CG Supervisor at Industrial Light and Magic in Vancouver. He has worked on projects including the Harry Potter movies, World War Z, and Star Wars Episode 8. “I’m currently working on the Disney live action movie, Aladdin. Through my 15 year career, before becoming a CG supervisor, I’ve worked in a multitude of departments including previz, postviz compositing, layout, tech-anim, model/texture and lighting/lookdev” he commented. Although Zwartouw has had a successful career in blockbuster films, he has always been a lover of independent cinema, and notably citing Darren Aronofsky is somewhat of a hero and an Inspiration. Nectar is Zwartouw’s writing and directorial debut. 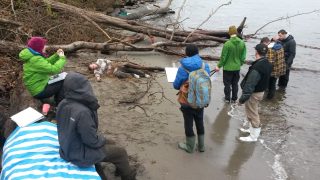 The film was fairly ambitious considering it was the first thing Zwartouw had directed, it is 20 minutes long, completed on a $15k budget and shot over 9 days with a crew of 50 (including post). In total, the film has 175 vfx shots, which included creating full CG hero creatures and transforming a Canadian beach into a fantastical tropical island through 2.5D environment work, and “finally integrating it into plates of hand-held camera work with rolling shutter, – which I must admit, I under-estimated the difficulty involved”. The effects and postproduction took about 18 months to complete. “We were fortunate to get sponsorship from the Foundry, Autodesk and Chaos Group. We also had the pleasure of working with local Vancouver companies, Think Tank Training Centre and CVD VFX” he comments.

There an area in Vancouver known as East Hastings, has a harsh drug addict problem, and Zwartouw was particularly moved and affected by seeing this local area of adopted Vancouver.

“Everyone has their vices and crutches that enable them to get through the day, but when this gets to the far extreme where there’s a voice in your head so powerful that it drowns out your morals, reason and even your loved ones, just to get a fix, you no longer resemble who you once were. It’s dehumanizing. With Nectar, what I wanted to do was separate the person from the addict, and show the addiction’s tyranny over the person.” he explained. David, the protagonist in the film Nectar, is in this situation where he’s been on drugs for so long, that he is a prisoner of his addiction, and his every waking moment and thought is controlled by the voice of his addiction

Along with being the Writer, Director and VFX supervisor, Zwartouw also completed about 40 shots in the film himself himself, “I did all matchmove/rotomation and layout work for all shots that had a full 3d rendered asset in it”. Naturally, he also acted as a CG supervisor, given his day job at ILM. “Something that unexpectedly ended up being time consuming for me was prepping shots for artists, as in pulling the plates, de-noising them, sourcing reference (eg. post-viz) and finding the shot specific elements. When you have 175 shots to do, that adds up!”

The environment work totalled about 80 shots in total. Most of the shots were created by projecting 2d matte paintings onto tracked 3d geometry. The tropical matte-paintings were created from photographic elements by Zwartouw with Catherine Ryan and Kirk Lawton. For some environment work the rolling shutter proved such a problem that the entire background was replaced. The team looked at using various Nuke Rolling shutter plugins to fix the issue, but these caused the 3D tracking to fail.

Shots with extreme camera shake had rolling shutter integration issues, “as the 3d camera track couldn’t match the “jello effect” of the wobbling footage” explained Zwartouw. “About 10 shots had this issue.- Some of the rolling shutter tracking issues were fixed with Nuke’s smart vectors, which rather than planar tracking or corner pinning, this enabled more fidelity and detail to the track. Smart vectors are fairly new to Nuke and I consider them as a bit of a tracking revolution as they enable you to track an element onto an organically deforming surface without tracking markers”.

Zwartouw points out that it is a lot easier to track CG make-up to live action faces using Nuke’s Smart Vectors, “even if the facial expressions are changing.”  In the cases where the smart vectors didn’t work, the team ended up having to re-project the existing background so that it would track with the new elements that were adding. Rhianna Rozentals dealt with the trickiest shots with this issue – “you’ll see an example of her work at the end of the breakdown reel, where the protagonist is running down the beach” comments Zwartouw. 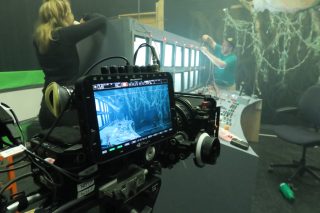 The Guard location involved a lot of monitor inserts into the surveillance console, as in most cases of modern filmmaking, “we didn’t have real monitors playing-back on the day,” says Zwartouw. “This was to give us flexibility in post, but also from a budgetary point of view we couldn’t afford a setup that sophisticated, so we had dummy monitors instead”. Rather than making the tv screens blue or green and having to deal with spill problems coming from the monitors, the team opted to wash the actor with a white(ish) light, which would match the colour of the imagery we would insert later. Because of the intensity of the light, they were able to pull luminance keys and use other blending techniques rather than having to roto the FG character when comping screens behind him.

One of the risks with a visual effects artist moving to directing live action, is knowing that many problems on set can be fixed in post. Zwartouw admitted he fell into this trap himself. While some problems could have been solved on set, he found himself pushing things to post, to accommodate the tight schedule, only to then partially regret his decision during the long months of post-production. “I did exactly what I have complained other directors have done, but I now understand why a director can end up during that, and saying ‘fix it in post'” he joked.

Several other ILM friends worked on the film in their spare time, “I could not have done this without them” Zwartouw comments.

The crabs were actually one of the first visual images that Zwartouw had when visually conceiving of the film. The part surveillance part crab creatures were produced in Maya and rendered in V-Ray. “The first thought that came to me for Nectar was a lone man walking through a remote jungle while being spied on by out of place, paranoia-inducing surveillance cameras with crablike legs. For me that image continues to encapsulate the main ideas for Nectar: social isolation and the use of juxtaposing imagery to evoke a conflicted state of mind. I felt these images and themes would lend themselves well to an interesting take on addiction”.

When asked what lessons he learnt and what he might do differently, Zwartouw replied “along with being more sparing with some of the vfx shot fixing work and hopefully having a less aggressive shooting schedule, I don’t think I would storyboard the whole film, just key shots. Then I would have a good idea of coverage so I could be more spontaneous with the blocking on the day”.