Gmail is the most popular email service provider in the United States, and the iPhone is the most commonly used device for accessing email, according to recent research from SendGrid.

The 2018 Global Email Benchmark Report was based on data from more than 50 billion emails sent by more than 100,000 senders to more than 2 billion recipient addresses.

Although Gmail is the most popular inbox provider worldwide, the proportion of consumers using the service varies widely from country to country, the analysis found. For example, Gmail accounts for only 22% of recipients in Germany—but 82% in India.

Some 56% of the emails examined were opened on smartphones or tablets.

In the United States, the most popular devices consumers use to access email are the iPhone, Samsung devices, and the iPad.

Although devices made by Apple and Samsung are the most popular for consuming email worldwide, manufacturers such as Huawei and LG do crack the top three in some countries. 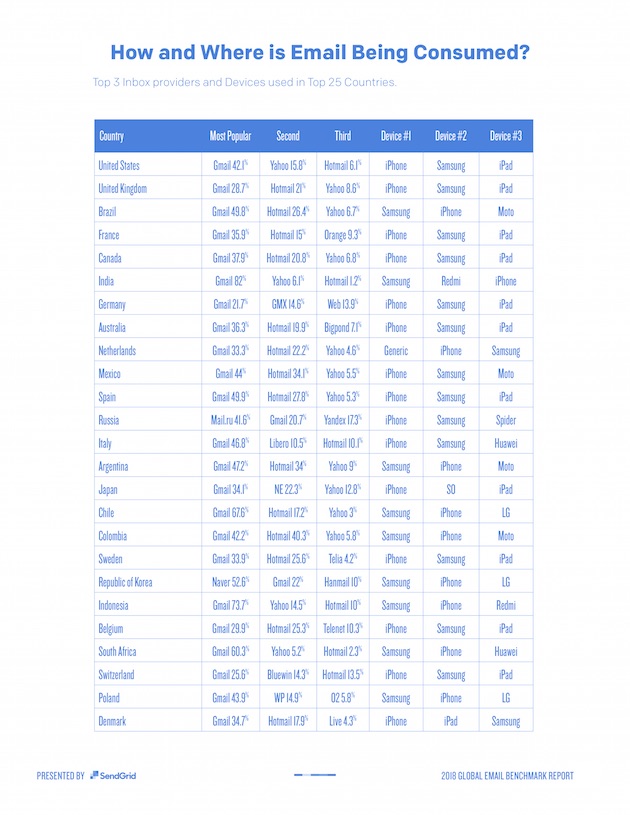 About the research: The 2018 Global Email Benchmark Report was based on data from more than 50 billion emails sent by more than 100,000 senders to more than 2 billion different recipient addresses.

Ayaz Nanji is an independent digital strategist and a co-founder of ICW Content, a marketing agency specializing in content creation for brands and businesses. He is also a research writer for MarketingProfs. He has worked for Google/YouTube, the Travel Channel, AOL, and the New York Times.